Pastry cream:
· One and a one-fourth cup of whipping cream
· Three egg yolks
· One by fourth cup Swerve sweetener
· A pinch of salt
· One tablespoon of arrowroot starch
· Two tablespoons of butter cut into 2 pieces
· One a half teaspoon vanilla extract
· One by fourth teaspoon stevia extract.

How to make a Keto Eclair cake?
For the Pastry cream:

· Initially, you need to bring whipping cream to a simmer in a medium saucepan over a medium flame.
· Take a medium bowl and whisk the egg yolks with sweetener and salt and then whisk in arrowroot starch until the time the mixture becomes pale, yellow and thick for about 30 seconds.
· Now, slowly whisk about half of the hot cream into yolks to temper and then return the yolk/cream mixture back to the saucepan and cook it until it becomes thick and glossy for about

one and a half minutes while whisking it continuously. It would get thicken up at a very fast pace so make sure you watch it carefully.
· Its time to remove it from heat and whisk in the butter, vanilla, and stevia. Transfer it to the small bowl and press plastic wrap flush to its surface. Chill it in the refrigerator for around 3 hours.
· In case if you don’t want to use arrowroot starch, you can whisk in half teaspoon of xanthan gum at the end in order to thicken the pastry cream. This must be your last step before chilling it.

For Meringue layers:
· For this, first, you need to preheat the oven to 350 F. Take a large piece of parchment and trace three 5 by 10-inch rectangles. Place the parchment on a large baking sheet.
· Now, take a medium bowl and whisk together almond flour and powdered sweetener.
· Now, in a large and clean bowl, beat the egg whites with granulated sweetener, vanilla extract, tartar cream as well as salt until it just begins to hold stiff peaks.
· So, it is the perfect time to gently fold in almond flour mixture until it gets fully combined.

· Now, spread the meringue mixture on to every three traced rectangles. Now, bake it for 15 minutes and then turn off the oven and prop open door with a wooden spoon. Leave it inside until it gets cool. 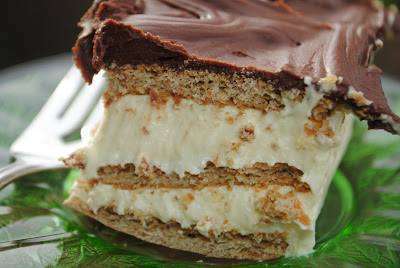 For the chocolate ganache:
· Take a medium saucepan over a low flame and melt the butter and unsweetened chocolate together and make sure you stir it until it gets smooth.
· Now, stir it in the powdered sweetener as well as vanilla extract.
· Let it cool for about 5 to 10 minutes until it gets thickened but still pourable. To assembling it:
· For assembling, firstly, you need to peel off the meringue layer very carefully and lay it on the serving platter.

· Spread this with half pasty cream. Now, top it up with another layer of meringue and spread the remaining half of pastry cream. Lastly, top it with the final layer of meringue.
· Now, pour ganache over the top of the cake and let it drip down from either side.
· Set a whole single hour before serving so that you can refrigerate but let it sit out for 10 minutes before trying to cut in order to soften ganache.