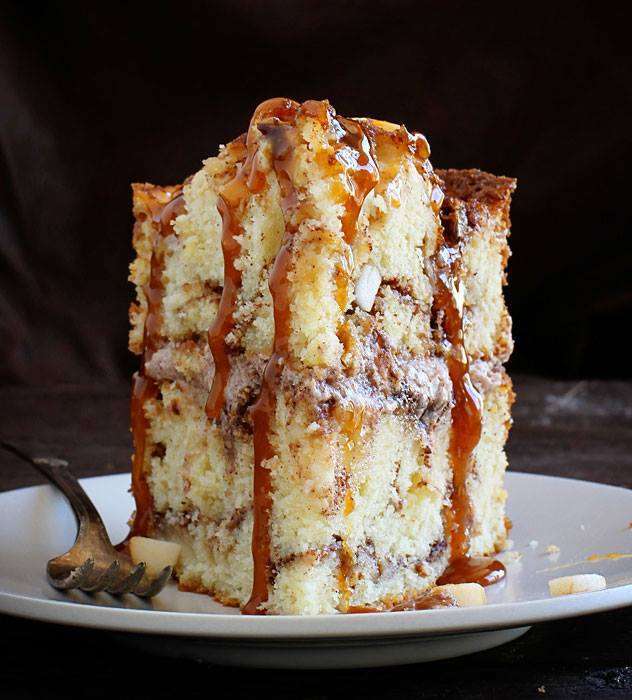 How to Prepare Low Carb Cinnamon Apple Cake
Cake:
Step #01 – Grease a 9×9 baking pan, and mix butter and sweetener in a bowl. Keep mixing until you get a smooth and fluffy blend.
Step #02 – Add eggs, one at a time while whisking continuously, to the mixture. Now, add the vanilla extract and mix again.
Step #03 – Take a medium-sized bowl and mix almond flour, baking powder, cinnamon, coconut flour, salt, and xanthan gum in it. Mix well to form the batter.
Step #04 – Add in the dry ingredients to the batter and mix again.
Step #05 – Add the almond milk to the mixture and blend thoroughly.
Step #06 – Uniformly spread the batter onto the greased baking pan.
Streusel:

Step #01 – Melt the butter in a skillet. Add apples, cinnamon, and sweetener to the skillet and cook for about 2 minutes while stirring continuously.
Step #02 – Remove the skillet from the heat and add almond flour, salt, and walnuts in it. Keep stirring until you get a loose dough.
Step #03 – Spread the dough uniformly over the cake batter and bake at 3750F for about 35 minutes. Check the cake, cover it with an aluminum foil or parchment paper if the topping is too much brown. Bake for another 10 minutes.
Step #04 – Remove from the oven and let it cool.
Note: If you need to make the cake sweeter, mix some swerve sweetener with a little cinnamon and spread it over the top of the cake.